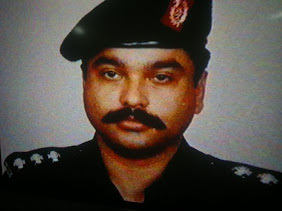 KARACHI, Oct 15: Zeeshan Kazmi, a police inspector who who had become one of the most controversial figures during the ‘operation clean-up’, led by a former interior minister Gen Naseerullah Babar, in Karachi, was found dead in PECHS late Tuesday night.

His body, wrapped in a cloth sheet, was believed to have been thrown out of a moving vehicle. Police found the body lying at a section of the Khalid Bin Waleed Road in block 2 of PECHS. It was first shifted to the Jinnah Post-graduate Medical Centre for autopsy and then placed in the Edhi morgue till being unidentified.

Family members told Dawn that Zeeshan had gone missing at about 8pm Tuesday night and that his cell phone was not responding since then.

“Our worst apprehensions were confirmed when we saw the photographs published in some of the morning newspapers,” said some relatives of the victim.

At the Edhi morgue, the body was identified by Zeeshan’s brother, Irfan Kazmi, who is an ASI in the traffic police. As soon as Mrs Zeeshan, accompanying some other women of the family, recognized her husband’s body, she fell faint.

Some police officials, who had worked with Kazmi, also visited the morgue and identified his body.
At the JPMC, where autopsy was conducted, sources said that the body had only one bullet injury — in the head. The bullet pierced through the skull, they added.

A senior police official, citing burn marks on certain parts of the body, indicated that the victim might have been subjected to torture by the killers. The burns seemed to be inflicted with cigarette, he said.

Inspector Syed Zeeshan Kazmi was an absconding accused in the Mir Murtaza Bhutto murder case (FIR No. 443/96) since May 3, 2002 when he managed to escape from the court of the district and sessions judge (East) after his pre-arrest bail plea was turned down.

He was dismissed from police service on September 3, 2003 for his long and wilful absence from the duty.
It may be recalled that Zeeshan Kazmi had indulged in scuffle with a policeman and some court employees while he was trying to escape from the court of Judge Ali Sain Dino Matlo, who had rejected his bail plea and ordered his arrest. The accused got his shirt torn off during the scuffle. Leaving behind the shirt, his official pistol with two magazines, NIC, service card and an amount of Rs3,520, the inspector took to his heels with his associates on a motorcycle.

Mir Murtaza Bhutto, founder of the Pakistan People’s Party (Shaheed Bhutto) and a son of the executed prime minister Zulfikar Ali Bhutto, was killed along with one of his close aides Ashiq Jatoi and five other people in a police action in September 1996. The police action had been carried out, allegedly following a shootout, some 100 meters from his residence in Clifton.

Besides Asif Ali Zardari, many other officials, including DIG of Karachi, Dr Shoaib Suddle, SSP South Wajid Durrani, chief of the Intelligence Bureau Masood Sharif, ASPs Shahid Hayat and Rai Tahir, SHOs Agha Jameel and Shabbir Qaimkhani, had been nominated as accused in the FIR at that time.

SHO Ghazanfar Kazmi was shot dead within the limits of the Nabi Buksh police station on Tuesday night.: August 14, 2014

Kazmi was an SHO at the Preedy police station and was killed in a targeted attack in the Garden area. The incident took place when four men on two motorcycles started following him as he was heading home in Garden Police Family Quarters.

The police have obtained footage of the killing via CCTVs. “In the footage, we saw that four young men were waiting for Kazmi outside the police station,” said Preedy police station DSP Iftikhar Lodhi. “They started following him as soon as he left. One of the four men shot at him when he slowed down for a turn.”

The deceased was shot at six times with a 9mm pistol. The police have collected empty bullet shells from the crime scene as evidence. Police officials believe that Kazmi could not protect himself even though he was armed as the assailants were well trained .

The SHO had been provided with a police mobile for security but at the time of the incident he was travelling alone in his own car. Police officials claim that Kazmi left without police protection of his free will.

A day before the attack, Kazmi had participated in an operation against encroachment at Empress Market and its surrounding areas. According to the police, there could be several motives behind the murder, including a sectarian aspect or enmity with a political party. They added that they were investigating the case. No case was registered till the filing of this report.

The man in uniform

Kazmi was a senior officer of the Sindh police. He joined the force in 1984 and has served as head of a number of police stations in the city, including Azizabad, Sharae Noor Jahan and Baloch Colony. He has also worked for the Federal Investigation Agency and the Anti-Car Lifting Cell.

He played a vital role in the Karachi operation during the early 1990s. At the time, he was serving as the head of the Azizabad police station and was considered a close aide of inspector Zeeshan Kazmi, who gained popularity during the 1992 operation, Murtaza Bhutto murder case and was killed in 2003.

SHO Kazmi was one of the few remaining officers of the police force who had participated in the 1992 operation.
Kazmi leave behind a widow and a daughter. The funeral prayers were offered at Police Headquarters, Garden and was attended by large number of senior police officers including the IGP, Additional IGP Karachi. The family has not decided if he will be buried in Karachi, or his hometown Multan.