By RAWHI RAZIM1 hour ago 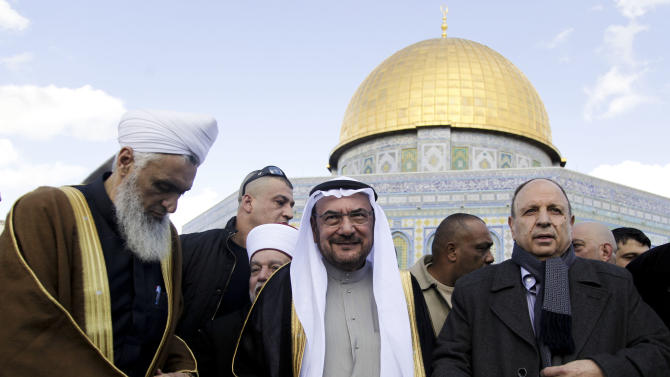 JERUSALEM (AP) — The head of the world’s largest Islamic organization on Monday paid a rare visit to Jerusalem’s Al-Aqsa Mosque, urging Muslims to follow suit to strengthen Palestinian claims to the holy site.
The visit by Iyad Madani, secretary-general of the 57-nation Organization of Islamic Cooperation, came at a sensitive time following months of tensions surrounding the spot in Jerusalem’s Old City. The hilltop compound is revered by Jews and Muslims and is a frequent flashpoint of violence.

Madani is a citizen of Saudi Arabia, an Arab country that does not have diplomatic relations with Israel and is the guardian of Islam’s most important sites. Al-Aqsa is Islam’s third-holiest site, after places in the Saudi cities of Mecca and Medina.

“Coming to the mosque is a right for me as well as every Muslim,” Madani said. “It is our right to come here and to pray here. No occupation authority should take this right from us.”
Israel captured east Jerusalem, including the Old City, in the 1967 Mideast war and annexed the area in a move that is not internationally recognized. The Palestinians claim east Jerusalem as the capital of their future state.

The hilltop compound housing Al-Aqsa lies at the heart of the dispute over Jerusalem. Known to Jews as the Temple Mount, it is their most sacred place, revered as the home to the ancient Hebrew temples.
The conflicting claims to the site have often spilled over into violence, most recently late last year as visits to the compound by nationalist Jews fueled rumors that Israel was plotting to take it over. Israel angrily denied the claims, but the tensions led to violent protests by Palestinians, Israeli restrictions on Muslim access and a wave of Palestinian attacks that killed 11 people.

While Madani’s predecessor, a Turk, also visited Jerusalem, visits by Saudi dignitaries are rare and need to be coordinated with Israel.
Palestinian President Mahmoud Abbas has encouraged Muslims to visit Jerusalem in solidarity with the Palestinians, despite claims by some religious leaders that the city should be avoided while under Israeli control.