Obama announces $1bn fund for EU to strengthen against Russia

President Obama: ”We will be expanding our exercises and training with allies to increase the readiness of our forces”

President Barack Obama has announced plans for a $1bn (£600m) fund to increase US military deployments to Europe, during a visit to Poland.
Mr Obama, who will meet Nato leaders amid concerns over the Ukraine crisis, said the security of America’s European allies was “sacrosanct”.
In April, 150 US soldiers were sent to Poland for military exercises amid growing tensions with Russia.
Mr Obama will also visit Belgium and France during his tour.
Meanwhile, Nato defence ministers are set to meet in Brussels to discuss the long-term security implications of Russian actions over Ukraine.
The Kremlin denies Western claims that it is supporting separatists in eastern Ukraine.
‘Step up partnership’“Our commitment to Poland’s security as well as the security of our allies in central and eastern Europe is a cornerstone of our own security and it is sacrosanct,” Mr Obama said after inspecting a joint unit of US and Polish F-16 pilots. 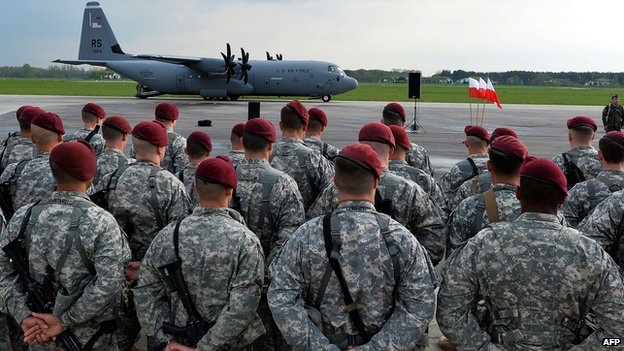 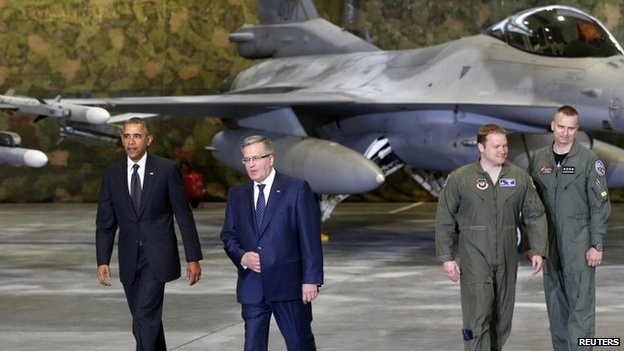 Mr Obama’s emphasis on relations with Asian nations has left some European leaders feeling neglected in recent years
Speaking at a news conference in Warsaw with Polish President Bronislaw Komorowski, Mr Obama warned Russia against provoking further tensions in Ukraine.
He said Moscow should use its influence to call off separatists in Ukraine’s east.
Mr Obama reaffirmed the US commitment to Nato’s principle of collective defence, announcing plans for a $1bn European Reassurance Initiative.
The programme, which will fund additional US military rotations to Europe, will need congressional approval.
The US would also “step up partnership” with countries such as Ukraine and Moldova, he added.
Mr Komorowski said Poland would increase its military budget to 2% of its gross domestic product, a move Mr Obama welcomed as a “reminder that every [Nato] ally needs to carry their share” in the alliance.

Nato defence spending targetsNato’s members have a target of spending 2% of their GDP on defence.
Countries that met or exceeded the target in 2013 included:

Countries that spent less than the target in 2013 included:

In a statement, the White House said the European Reassurance Initiative would not “come at the expense of other defence priorities, such as our commitment to the Asia Pacific rebalance”.
Mr Obama’s emphasis on relations with Asian nations has left some Eastern European leaders feeling neglected in recent years, the BBC’s Adam Easton in Warsaw reports.
The crisis in Ukraine has been keenly felt in a region that underwent decades of dominance by Moscow, our correspondent adds. 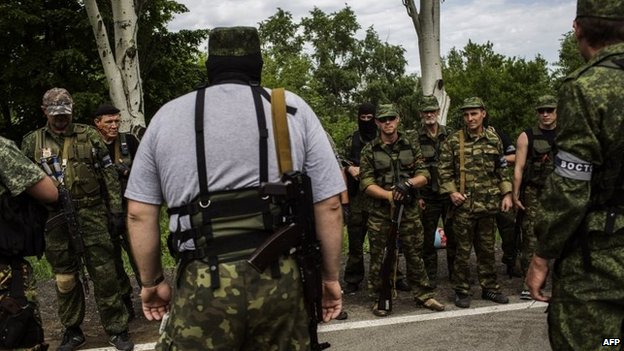 Western leaders have accused Russia of worsening tensions in east Ukraine
In Belgium, Mr Obama is expected to urge Western leaders to reaffirm their united position on Ukraine at a G7 meeting of major industrial nations.
The summit was originally to be held in Russia, but Western leaders decided to change the venue following Moscow’s annexation of Crimea in March.
In France, the US leader will take part in ceremonies to commemorate the 70th anniversary of the D-Day landings in Normandy.
President Vladimir Putin is also invited, but the White House has already made it clear that the American and Russian leaders will not hold formal bilateral talks.
Washington and its European allies have repeatedly urged Moscow to de-escalate tensions in eastern Ukraine, where fighting has continued between separatists and government troops.
On Monday, hundreds of rebels attacked a border command centre near the eastern city of Luhansk.

Analysis: Jonathan Marcus, BBC diplomatic correspondent, BrusselsPresident Obama’s request for $1bn to bolster Europe’s defences is not a lot of money in terms of the overall US defence budget.
But it may be more significant in terms of the kind of things Nato is likely to do in response to the Russian actions in Ukraine.
This is not about a return to the Cold War. Mr Obama has described Russia as merely “a regional power”.
Indeed it is a moot point how much of a threat it really poses to Nato territory. But specific Nato allies are worried, so something has to be done.
Modest spending will be needed to improve readiness, to mount exercises and so on, and the US is showing that it is prepared to stump up cash.
Congress no doubt may make some comments about the Europeans needing to do the same.