Rubber bullets are one of the tactics the police have used against protesters in Ferguson, Missouri.

Rubber bullets can be dangerous and harmful. The small body of research that has looked at the injuries they cause has routinely found a high number of serious injuries and a small number of deaths.

The British Journal of Surgery published the first report on rubber bullets in 1975, shortly after the British Army introduced the new technology in Northern Ireland in 1970.

They looked at the injuries caused to 90 patients that the new rubber bullets struck. These are all people who went to seek health care services — so this does leave out those who may have been struck but did not suffer significant injury. Of the 90 patients studied, the researchers found that 40 patients required hospital admission. Seventeen of those admitted were left “with permanent disabilities or disfigurements.” One person died.

“Despite the low mortality, the rubber bullet cannot be considered completely safe in its present form,” the authors of that study warned. “This is chiefly a consequence of its inaccuracy [in being shot].”

Rubber bullets have changed and evolved since the 1970s, but the most recent research (which, unfortunately, is now 14 years old) doesn’t suggest they have become any less dangerous.

Israeli researchers looked at injuries caused by rubber bullets during the Israeli-Arab conflict in the fall of 2000. Their study included 151 patients who had a combined 201 injuries caused by rubber bullets. The injuries appeared all over the patients’ bodies, a random distribution that — as the British researchers warned in the 1970s — indicated a lack of accuracy in shooting. 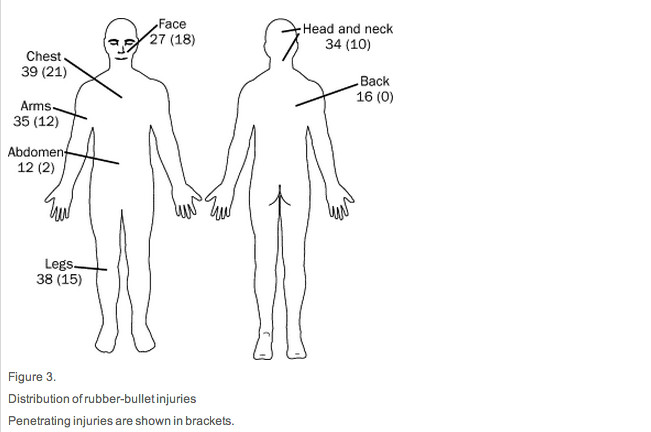 Of the 151 rubber-bullet patients who were seen, 68 people had to be admitted to the hospital for treatment. Eleven of them underwent surgery that required general anesthesia. Three, two of whom were struck somewhere in the face, ultimately died as a result of their injuries.

“This type of inaccurate ammunition … makes it difficult or impossible to avoid severe injuries to vulnerable body regions such as the head, neck, and upper torso, leading to substantial mortality, morbidity, and disability,” the authors of that Lancet study wrote.

The most recent research on rubber bullet injuries was published in 2010. In the journal Injury, French researchers examined six patients who were treated for rubber bullet related trauma since 2000 (rubber bullet guns are marketed to European Union citizens as self-defense weapons). The five patients lived, but all had “severe facial injuries necessitating long-term hospitalization and two-to-three step surgical treatments.”